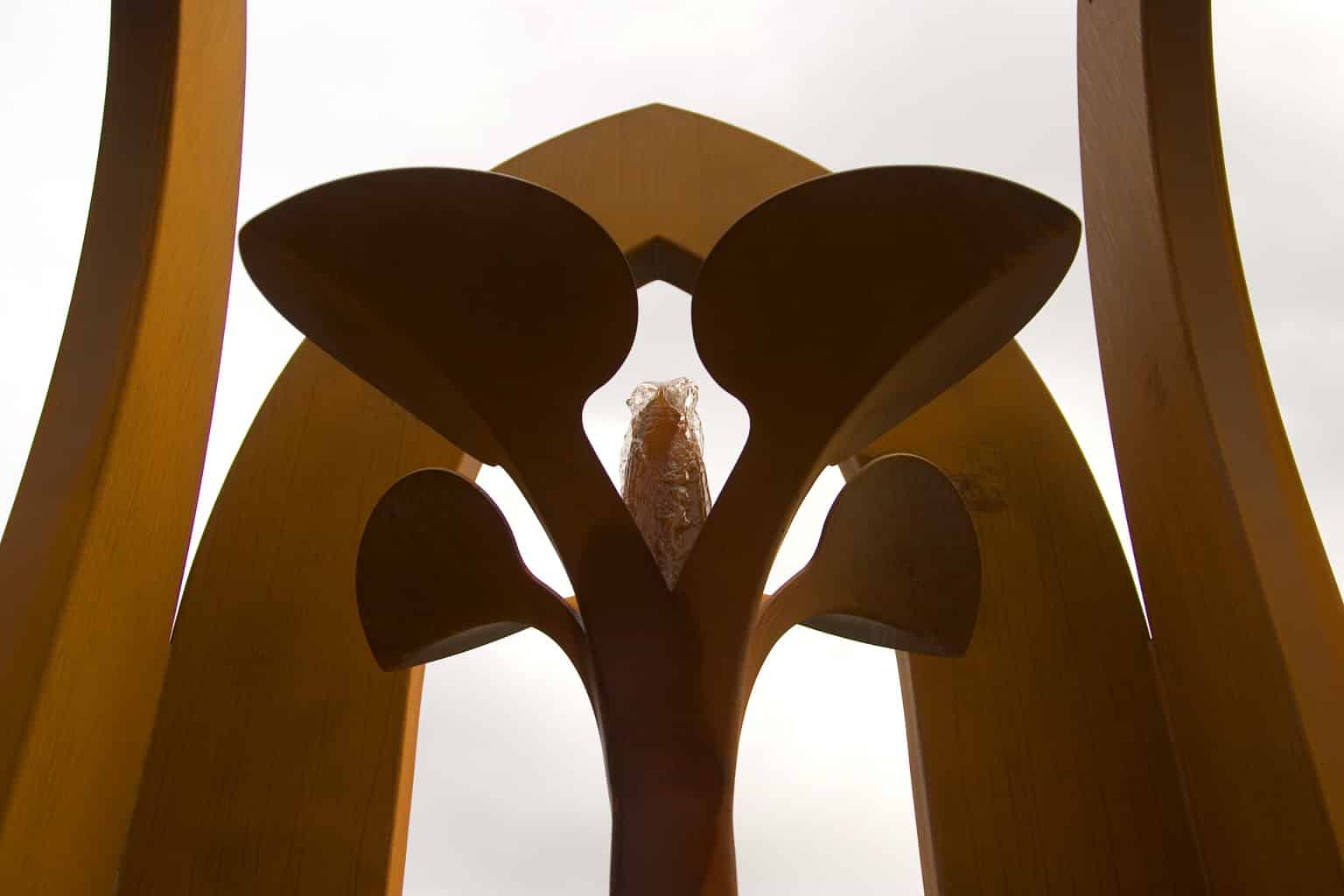 The Garden of Judaism
Judaism occupies a special place amongst the world religions, because it experiences itself as ‘the chosen people of God’. To Abraham already God promised the land of Canaan and on mount Sinai He made the unique covenant with the prophet Moses. Even in world history the Jews form a separate group, as they have mostly lived in exile. The life of the Jews is dominated by the Thora and the Talmud, which are deeply anchored in their daily existence. The high moral demands that the Laws of the prophet Moses request from their adherents supposedly find their reflection in the relatively high numbers of highly gifted Jews in our society. The red thread in Judaism is the idea of salvation through the expected Messiah, the saviour of all suffering and evil. This longing for salvation is also central in Buddhism.
From the long history of Judaism two other world religions have evolved: Christianity around the year 0, and the Islam around the year 600.
As a symbol for the Jewish religion the ‘Menorah’ is chosen. This 7 armed chandelier symbolises the sun, the moon, and the most important planets that together shine light in the darkness of the chaos and insecurity of life.
The Menorah in this Garden is, as it were, a tree of life, a ‘sign’ that points to the Cabala and through its manifested form symbolises God as the almighty.
The 7 Buds at a height of 3.33m represent the Laws that are handed down to Moses from on high. The Buds high above, almost loose from the earth, point to the idea that God does not reside in natural forces, but in a realm of His own.
From the centre Bud, water wells up softly. In the Temple of Solomon there was a giant basin with water as a symbolisation of the ‘Jam’, the representation of the primordial sea. The floor of the Garden bears the sign of two interwoven triangles: the Star of David.
Since the 15th century, the Star of David has become the ultimate sign of Judaism, a.o. on the flag of Israel.

The Garden of Islam
In the centre of this Garden stands one single Bud as the representation of the only One: Allah.
This Bud has a diameter of 99cm: Allah has 100 names, of which 99 are known. The 8 sided (octagonal) Bud, from which water softly wells, is placed in the centre of an 8-sided basin with a diameter of 3.33m. The 8 sides point as organising principles to the sacred geometry and garden architecture in the philosophy of the Islam. Out of this philosophy wondrous gardens have been constructed, such as the ‘Alhambra’ in Granada. One can rightfully speak of ‘Divine Gardens’, originating from the human mind and inspired by the image? of Allah. These Gardens breathe more of the Sufi side of Islam, as the poetic interpretation of the rigorous laws of the Koran.The strict interpretation of the Koran makes it difficult for a part of the Islamic people to adapt to new social economic circumstances, which is why they could become isolated from global development processes. As a counterpart within the Islamic movement, the Sufi movement came into being as a universal spiritual perception of humanity, aiming at brotherhood and the deep understanding that deep down all religions are equal.
The Koran, the Holy Book of the Islam, emphasises the regulation and solidarity in all creation, with the prophet Mohammed as perfect inspirer. The Koran, the holy law, the law of duties for the Islamic people has, like with Judaism, great impact on daily life.The floor of the Garden of Islam, shows the image of the -for the Islam so important-
8- fold geometry as manifested archetype of creation. The 2 interwoven squares symbolise the polarity of creation and are inspired by the original diagram of Aristotle: Earth-Water- Fire-Air>>>Cold-Warm-Wet-Dry. These squares symbolise the breathing-in and breathing-out of the great Compassionate One and thus the 8-fold form represents the entire cosmos.

The Garden of Christianity
Christianity is a religion inspired by the life of Jesus of Nazareth. His preaching, crucifixion, and resurrection are described in the New Testament. God has sent his only born son Jesus Christ to the earth to liberate mankind from sin.
The crucifixion of Jesus reconciles Man with God.
Christ is the new Adam. As the man-born Son of God he says of himself: I am the way, the truth and the life’. As Messiah Jesus received the name Christ: Son of God. Many saw in him the long-expected Messiah. The strange thing is that Jesus has not left writings of his own. He says of himself: “I am that I am”.In the centre of the Garden of Christianity stands a Temple-like contour with in the middle an upcoming Bud, from which water wells up. This sign with 4 Petals has a height of 1.80m. This size symbolises ‘the Human Measurement’. The 4 Petals represent the 4 Evangelists. In the New Testament they give testimony of the life of Jesus as Saviour of mankind. The open Temple form, formed by 4 gothic arches has, like the Menorah, and the chakra-tree, a height of 3.33m As a symbol it represents the institute of the church that has grown around the charismatic man Jesus: the Catholic church and her hybrids around the world. The 4 gothic openings of the Temple refer to the 4 directions of the wind and form a cross from the heart: the universal sign of all Christians. In Christianity Christ is seen as the word of God made flesh, as revealed in the Bible. Christ preached: “Thou shalt love the Lord thy God with all thy heart (…) and thy neighbour as thyself.”

The Garden of Buddhism
In Buddhism the personal self, soul or ego has no real meaning because it is finite and, as all other things in the world, it passes. All being in life is conditioned by other being, from every moment to the next. By ‘letting go’ and ‘letting be’ in a peaceful way, one liberates oneself from the emotional uproar of all desires. The Bud, from which water wells, with around it 3 petals, forms the heart, the core of the Buddhist Garden. It radiates a feeling of purity, of quiet harmony, and sovereignty. The flower is as the lotus posture of Buddha. The 3 petals represent the triad of the Soul in Buddhism, which gives room to body and soul, so that the adherents can grow to a higher understanding. The Bud has the hexagonal structure of the honeycomb and is 1.80m high – the human measurement – the germ of the Buddha-nature, which is hidden in each of us. The ultimate nature of man is his growth into a state of infinite, boundless consciousness, a growth to Nirvana: an eternal blissful void. The individual however is subordinate to a continuous rise and fall and the soul must go through a number of reincarnations in the process towards complete salvation. The Bud in the Buddhist Garden is also a metaphor of rebirth, of being born again and again, or as a symbol of the ‘re-embodiment’of the soul of the Buddhist. By the denial of God as ruler, Buddhism is one of the most peace-loving religions. In its point of view each person is responsible for the design and true identity of his own life, in order to become one with the eternal nature of Spirit. The growth of his consciousness forms the key to the mystery of man.

The floor of this garden is shaped as a circle, the purest symbol of ‘Being’ The circle as representation of the cycle of birth and re-birth, as endless process on the way to perfection: the Nirvana.

The Garden of Hinduism
In Hinduism we find the most profound view in relation to the nature of the individual. Hinduism applies a broad conception of the complexity of the Cosmos, a conception that originates directly from mystical experience. Hinduism is the eldest of the 5 world religions and it sees consciousness as an utterly divine mystery. This universal Self they call Brahman. Through intensive meditation it is possible to come into contact with Brahman and this opens the way to the inner awareness of the Self: the Atman. Atman is the permanent presence of Brahman in all things, in every part of reality. The deepest core of our self is one with the deepest core of the universe. Atman=Brahman, Brahman=Atman.
The mystical founders of Hinduism perceived the divine presence in the entire cosmos and experienced this presence in their own heart: the Guha or Cave of the Heart. This Cave of the Heart is the deepest point of human subjectivity and freedom and it is a place untouched by time or outer circumstances. This Cave of the Heart is the hidden transcendent place from which we experience the divine in ourselves. To arrive at this place and disclose the supernatural world we have amongst others the teachings of Yoga, with the 7 chakra’s of the Lotus energy, to come to a growing level of awareness. The idea of the Cave of the Heart and these 7 energy-consciousness centres is depicted by a symbol of the tree of life, related to the menorah: the chakra tree, or even more strikingly, the chakra-heart-tree where water flows from the centre. Its height of 3.33m is a symbolic reference to the thousand-petalled Lotus of the 7th chakra (1000 = 3 x 333 + 1).
The floor of the Garden of Hinduism is formed by 3 heart-shaped signs, that grow outward from the centre and point to the divine reality that unifies the universe. The divine power lives in our hearts. 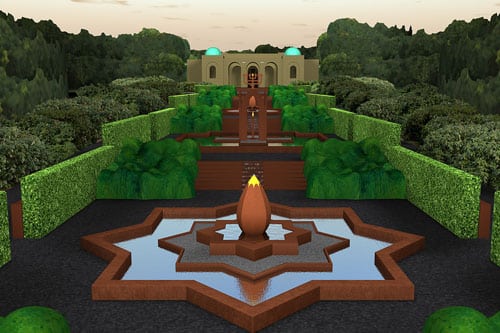 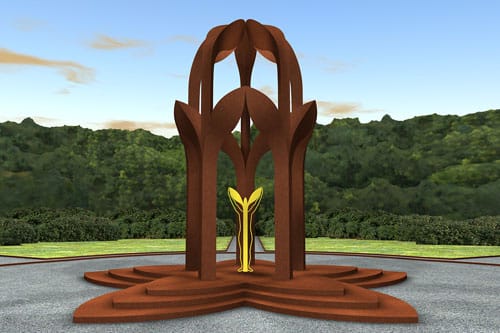 All the world’s major religions, with their emphasis on love, compassion, patience, tolerance, and forgiveness can and do promote inner values.
But the reality of the world today is that grounding ethics in religion is no longer adequate.
This is why I am increasingly convinced that the time has come to find a way of thinking about spirituality and ethics beyond religion altogether.

The Tempelhof – “laboratory of new thinking” – offers space for inspiring small-scale brainstorms / meetings or guided tours and the opportunity to purchase the artworks.

Since 2019, De Tempelhof has been the youngest Dutch National Cultural Heritage special interior-ensembles
and is therefore open every year on “Heritage Days”.

Furthermore, there is the unique possibility to book a philosophical overnight stay at De Tempelhof
– to reflect together with the artists – the art, life and the future of our world: Life as a Work of Art!