Skip to content
Watch film The World My Garden

Life as a work of art 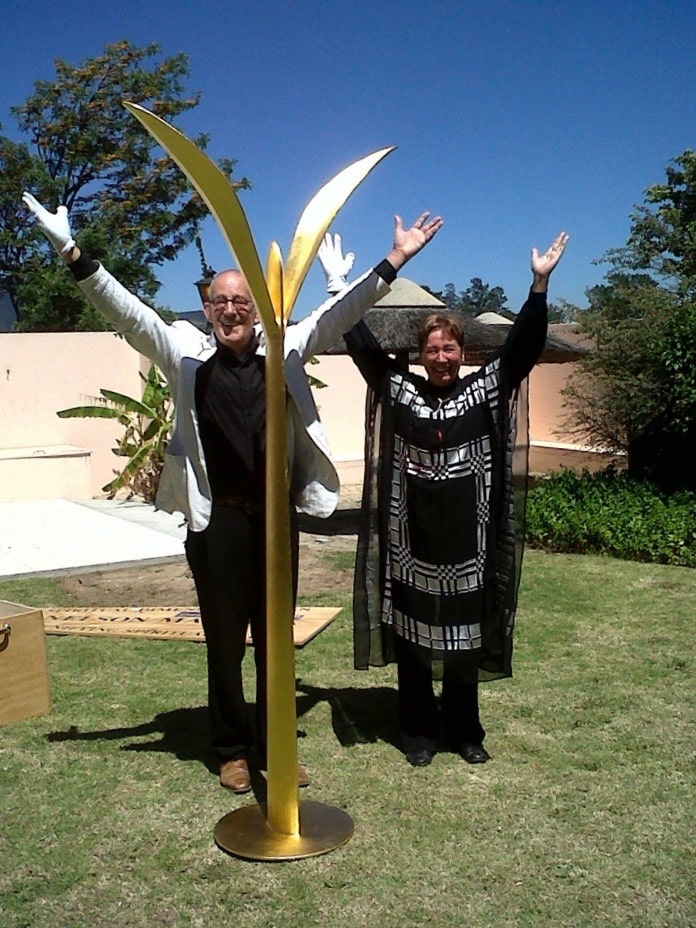 Handing over the 4th Golden Plant to honour Mr Nelson Mandela for his persistent struggle against apartheid in South Africa, his warm-hearted thorough commitment for world peace and his call for democracy, compassion and fraternization.

In the summer of 1965, Adelheid and Huub Kortekaas meet in the water meadows of Winssen in the Land van Maas & Waal region. In 1969, they married and moved to Doddendaal Castle. Huub began living and working here as a visual artist in 1965. And it was here where their two children Femmigje and Tjebbe were were born. Huub, the philosopher and wellspring of the fundamental idea, and Adelheid with her authentic creative input and also her passion for architecture and garden architecture.

Two people bound together by a dream decided to live life as a unique adventure – against the backdrop of the age-old philosophical questions: Who am I? Why am I here? How do I shape this life?

It is from this attitude towards life and their connection and commitment to society that their idealistic, dynamic, and creative partnership emerged. As artists, they want to be inspirational, bridge-builders, in touch with society. From this starting point they developed – piece by piece, sometimes in fits and starts – a significant vocabulary of the symbolic image. A growth process from I to We.

Their first cautious joint project grew out of the Heart and the Angel and resulted in the Circle of Angels (1970), a whimsical, travelling, colourful environment that, as an art project, reflected their socio-cultural engagement. During their individual show at the prestigious Art Basel international art show in 1981, they discovered, however, that behind the scenes, rather than what drives their passions as visual artists, what the art world is truly interested in is the quest for profit. This confrontational experience marked the start of a fundamental shift in their life together. They decided to withdraw from the prevailing climate in the art world and strike out in an entirely new direction – their own direction. It was a decision with a sweeping impact. From that moment on, the places where they lived and worked became the manifest platform and source of inspiration for all their universal images and concepts.

The Plant in the total work grows into a metaphor for humanity: humanity growing from within the dark earth out towards the light. The realization that everyone is a unique Seedling of Mother Earth, each of us connected by the intrinsic longing to become who we are in our deepest essence, makes us co-creators of our reality. This realization becomes a participatory awareness in that longing, a transition from individual to universal thought; from I to We. As alchemists, they look for fundamental processes of becoming in life, the golden spark, a gnostic symbol of a new symbiosis between economics and spiritualism, between culture and nature, between East and West, and between individual and society.

In 1995, Adelheid designed the basis for the house and garden of  The Tempelhof. Between 1995 and 1999, they created and built the Tempelhof, where they currently live and work. The Tempelhof as Gesamtkunstwerk is inspired by the “Spiritual Measure of Man”. It is the symbiosis of the interplay between reality and illusion, between Truth and Fiction. The Tempelhof forms the crystallisation of the chaos and love of their passionate quest, oriented towards the longing for harmony and meaning in their lives and work. The Tempelhof is the poetic chronicle of a development towards a new human being and a new world view: man on the path to a new reality, man on the path to a new renaissance. Their dream is that the Tempelhof as Gesamtkunstwerk will be and remain a source of inspiration for future generations. Life is a challange, as endeavour, life as a Work of Art.

Their global Quantum Art projects include: ANIMA MUNDI, The Unifying Spiritual Field of the World, The Spiritual Garden, the Icons, and the Alphabet of ArchiTecture, Which Flower are You?

‘Fundamentally, mankind is like a flower in the metaphysical garden of the world.’

From 2015 the artists saw this poetic vision all over the World, with the question: Woud you please saw with us for a better world, ‘Which flower are you?’