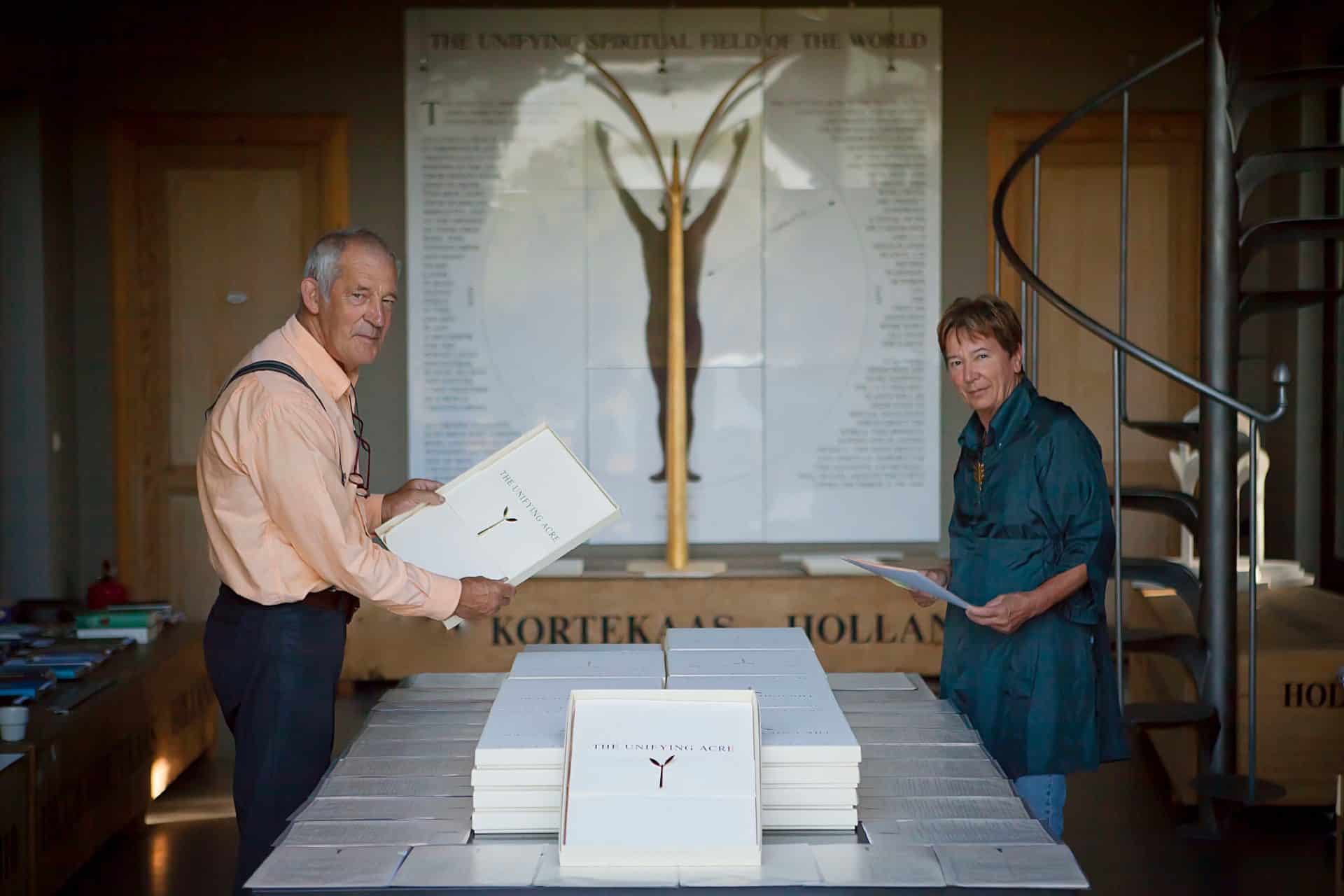 An Acre of Peace - of Changing Awareness

The Unifying Spiritual Field of the World is a collective, spiritual Quantum-Art project, a three-dimensional account of the universal Changing Awareness. This project is a manifest of a germinating new view on humanity and the world: Human Being on his Way to a New Renaissance. Creator and Creation are one. From this point of view we use the name Quantum-Art, in which organising principles, like numbers, acquire an important symbolic and mythical significance.

The global non-profit art project The Unifying Spiritual Field of the World, initiated by the Dutch sculptors Huub and Adelheid Kortekaas, comprises a total of 990 small gilded Seedlings and 1+9 gold-plated Plants, 2.20 meters in height, which symbolise the ‘Spiritual Dimension of Human Being’.

The artists have been sowing (and still do) all over the earth since 1991, awarding them to people who specifically contribute to the Changing Awareness. The Golden Plant and the golden Seedlings are the key symbols of the art project The Unifying Spiritual Field of the World. As in a germinating seed, all patterns are already present in origin. It is the miracle of the creation that Human Being becomes aware that he is a unique creator on this earth and that he realises which responsibility this awareness brings along. A potential which – in nature and as well as in spiritual values – manifests itself in exuberant cultural diversity. In the art project The Unifying Field, the Plant becomes the metaphor for Humankind, Men and women growing out of the dark into the light, standing in the centre of the world realising anew that all is connected with all and one is part of a comprehensive organism. Creator and Creation are one. From this point of view we use the name Quantum-Art, in which organising principles, like numbers, acquire an important symbolic and mythical significance.

Handing over the 2nd Golden Plant -together with former Prime minister Mr. Dries van Agt- on June 11th 1992 on the world’s ecology congress, UNCED Rio-’92, Brazil, as a symbol of a worldwide respect to all Indigenous People.   See also Invitation Oprah Winfrey 6th Golden Plant for Female Energy  and the 4th Golden Plant for Nelson Mandela

Inspired by the Quantum-Art project THE UNIFYING SPIRITUAL FIELD OF THE WORLD.
We see that these signals spread across the world and realize that women increasingly have the nerve and the guts to break through existing social structures. They look for new ways to design their lives, fighting for a more humane, more harmonious society. Their decisiveness and resourcefulness increasingly substitute the prevailing and controlling patriarchal cultures.
Women are the key to opening the gates to a new society. If women across the world link up their specific female strength, they will be able to approach the disputes and longstanding feelings of hate in the world in their very own way and possibly eliminate or at least reduce them.
Evolution wise the future of the earth asks for a new global zest; the Quantum leap of the consciousness that all and everything is connected. Consciousness becomes a participating consciousness, a transition from individual to universal thinking, from I to we. A new space arises in which the female and male energies can inspire each other equally to grow to a new powerful and creative spiritual world order. Life as a unique challenge of creation, life as a work of art, life as Quantum-Art. The human being as a spiritual flower on his way to a ‘New Renaissance’. In ancient history, the Big Mother was the symbol of the sacred energy of mankind. In the course of history Woman as Goddess, as utter symbol of fertility and creative power, lost her matriarchal status to an ever increasing prominence of a patriarchal Male Image of God. The world of art and religion offers a clear and fascinating image of this development in human thinking and action. Here we see, amongst, that Woman is ‘revered and distinguished’ and put on a pedestal, but stripped of her identity and scope. At the beginning of the previous century and later on in the 1960s and 1970s, Women’s Lib manifested itself ever clearer, especially in Europe. Woman wants to be liberated from patriarchal society, feel respected and seen as an independent and equal individual. Viewed in the spirit of the age, Woman, by dint of her direct clarity, open-mindedness, compassion and original, creative approach to daily reality, is stepping out of obscurity and firmly finding her way in the present complex society. The arrival of the limitless Worldwide Web plays an
important role in this.
THIS SPECIAL ART EVENT IS MEANT TO DRAW GLOBAL ATTENTION TO THE UNIQUE POWER OF THE ‘FEMALE ENERGY’
During the miracle of creation, male and female forces materialised – a truly evolutionary vision on the part of the ‘Creator’; after all, the field of tension between both forces has proved to be an inexhaustible source of creative power.
33 INSPIRED WOMEN
Amy Tan * Anne Hastings * Annine van der Meer * Brandon Bays * Caroline Cory * Christine Pannebakker * Ciska Dresselhuys *
Danah Zohar * Esra’a Al Shafei * Eve Ensler * Fiona Montagu * Hoda Al Khamis-Kanoo * Inez van Oord Irene van Lippe-Biesterfeld * Isabelle Allende Karen Armstrong * Lulu Wang * Marianne Williamson * Nalini Nadkarni Nancy Lublin * Narisscia Botha * Nelie Kroes * Ogega Moturi * Paola Antonelli * Rickie Byars Beckwith * Shirly Nicholson * Sima Samar * Somaly Mam * Wangari Maathai, and 4 to the Woman of the Golden Plant.
Nr. 33 for herself and we asked her to send 3 to women who touched her life.
AN ODE TO THE FEMALE ENERGY
A Golden Plant, symbol of ‘The Spiritual Dimension of Man’ is being offered by the Quantum-Art project
THE UNIFYING SPIRITUAL FIELD OF THE WORLD to one of the most radiating, passionate, spiritual and realistic women in the world, as symbol of Women’s Energy that manifests itself more and more vigourously. This Golden Plant at the same time is an ode to millions of unknown Women who devote themselves to the processes of change in the everyday reality. In the light of this manifestation 33 inspired Women from this World Acre will receive a small golden Seedling with a personal letter and a
covering document for their unique contribution to the Processes of Change in the World.
THIS SPECIAL ART EVENT IS MEANT TO DRAW GLOBAL ATTENTION TO THE UNIQUE POWER OF THE ‘FEMALE ENERGY’
De Tempelhof, 2010 © Adelheid en Huub Kortekaa s

The project, The Unifying Spiritual Field of the World, comprises

the Sowing and Adoption project
In this project 1+9 times 99 Seedlings are sown. They are gilded and numbered and 9 centimetres tall. Each Seedling is accompanied by a numbered and signed art document in a box. The Seedling is a metaphor for the potential vigour of man. The gold represents Humankind’s spirituality. On October 10th , 1991, the artists ‘sow’ 1+3 small Seedlings to 99 people all over the world. These 99 people will each receive 1 Seedling for themselves and an additional 3 Seedlings to sow on the field we call Earth. In this field (triptych) these 99 special people are arranged in 3 rows of 33: 33 people from the spiritual, artistic and philosophical spheres; 33 people from the world of science; 33 people from politics, economics and the executive powers. Thus a field grows from idea into reality. The chosen ones symbolise human diversity and are not necessarily related to a personal appreciation. On October 10th 1991, the cultural attaché of the Russian embassy, Vladimir Naidenov, received – on behalf of Michail Gorbatsjov – the first 1+3 Seedlings. That very day the other 98 packages were sent all over the world by PTT-Holland. The remaining small Seedlings on the 6 triptychs will yet be dedicated to other people who specifically contribute the Changing Awareness. These small Seedlings also are open for adoption. Thus, by adopting small Seedlings, people support ‘the changing awareness’ and take part in the creation of this work of art. They add their name or sign on the Screen, next to the numbered Seedling adopted, and will receive the corresponding Seedling with a signed and numbered art-document. 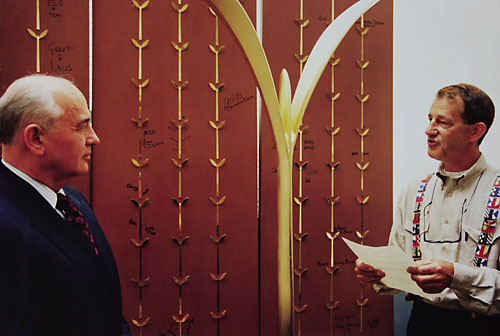 2. the Planting project
Each field (triptych) of 99 plants is accompanied by a fully grown, 100th Plant which is covered with gold leaf and which is 2.20 metres in height: a human being with arms stretching upwards: the Spiritual Dimension of Human Being. This Golden Plant is the metaphor for the field of tension between heaven and earth, Human Being as form and movement, as interplay of matter and spirit, man as Quantum-Art in the divine comedy of life itself. The 1+9 Golden Plants are only offered to special humanitarian and personal initiatives that promote a positive change in the climate of life. 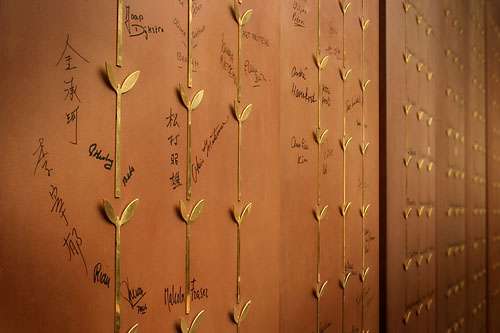 3 the Image Screen
On the Screen the growing-stages come together. It consists of 1+9 monumental triptychs in corten-steel, of which its rusty colour symbolises the earth. Each triptych, measuring 2.70 by 2.70 meters, has 99 numbered gilded Seedlings on it, and the gold of these Seedlings represents spirituality. The triptych without  a number represents the beginning and on it are the names of the 99 persons who received 1+3 Seedlings each. The fields 1, 2 and 3 remain reserved for those chosen by the first 99 people. In all the other fields we will keep on sowing and the Seedlings will also be up for adoption,  thus visualizing the growth of the ‘Unifying Field’. On the middle Screen of each triptych the name or organisation is mentioned where the 100th plant, The Spiritual Dimension of Human Being’, will come to full bloom.The Unifying Spiritual Field of the World is a collective, spiritual Quantum-Art project, a three-dimensional account of the universal Changing Awareness. This project is a manifest of a germinating new view on humanity and the world: Man on his Way to a New Renaissance .See: Manifest Female Energy
Nelson Mandela

‘THE SPIRITUAL DIMENSION OF HUMAN BEINGS’

The Golden Plant, this Human Being-Plant symbol of 2.20m in height symbolizes  the “Spiritual Dimension of Human Being”. It feels like a Quantum-leap in the field of forces of nature and culture.

The Golden Plant is intended as the global sign for universal spirituality, the ultimate sign of the awakening New Renaissance, in which the awareness of ‘The Spiritual Dimension of Human Being’ becomes the source of the modelling of one’s own, unique life.

This Golden Plant is the metaphor for the field of tension between heaven and earth, Human Being as form and movement, as interplay of matter and spirit, Man as Quantum-Art in the divine comedy of life itself. In this metaphysical field of influence Human Beings attempts to become what he or she is in his or her deepest essence.

The Golden Plant is the icon of the potential energy that arises from our bodies. It is the image of the hidden power of each person in his longing to grow from darkness to light, a manifest universal symbol for a re-awakening spiritual image of Human Being and the world, a gnostic sign of our alliance with the all-inspiring All. The Golden Plant arises from the emptiness that comes into being when the 33rd word ‘Plant’ in the artproject The Metaphysical Garden is taken away;  the representation of the story of the Creation according to John, St. John 1:1  – 1:14

The birth of the Golden Plant is the inspiration for the worldwide Quantum-Artproject: The Unifying Spiritual Field of the World. This World Acre of Peace grows from the awareness that every human being is a unique Seedling of Mother Earth on his way to a New Renaissance. 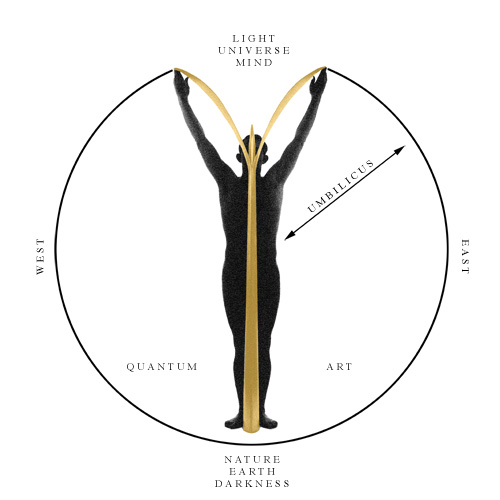